Derivation:.
From the Latin australis (southern) and the genus Stipa.

Florets.
Fertile florets 1. Lemmas convolute (nearly always, at least partially
concealint the palea) or involute (in only two species), saccate (conspicuously
so in A gibbosa) or not saccate (nearly always), decidedly firmer than
glumes, with round or oval abaxial epidermis silica bodies, becoming indurated
(usually, horny), white in fruit or yellow in fruit or brown in fruit or black
in fruit (or purple), entire at apex (usually) or incised, awned, without a
germination flap, 3–5(–7) nerved, having flat margins not tucked into palea
(nearly always, when convolute) or having margins tucked into palea (rarely,
when involute), not keeled. Awns 1, from a sinus (rarely, inconspicuously) or
apical, non-geniculate or geniculate (or sometimes bi-geniculate), when
non-geniculate, flexuous, hairless or hairy (or scabrous, but not plumose),
much shorter than body of lemma to much longer than body of lemma (14–200 mm
long), persistent (although articulated at the base of the column, and easily
breaking off there). Awn bases twisted. Palea relatively long (nearly always,
usually slightly shorter than the lemma, sometimes slightly exceeding it) or
conspicuous and relatively short (sometimes only about a third of the lemma
length in A. ramosissima and A. verticillata, even shorter in A.
tuckeri), tightly clasped by lemma, entire (usually blunt or acute,
occasionally acuminate), thinner than lemma (usually translucent to leathery in
the median strip, with membranous margins), 2 nerved, 2 keeled (sometimes
depressed between the nerves) or not keeled (mostly), scabrous or hairy. Callus
short (rarely) or long (mostly), pointed (usually) or blunt (rarely). Lodicules
2, or 3. Ovary not hairy. Stamens 3. Stigmas 2. Grain small or medium sized or
large, fusiform, compressed laterally or terete. Hilum long-linear. Embryo
small. Endosperm hard.

Notes.
Australian species of Stipa were separated from other stipoid grass
genera and placed in a new genus Austrostipa by Jacobs and Everett
(1996), on the basis of cladistic analysis based on morphological and anatomical
data. In both this study and that of Jacobs et al (2000) the genera Achnatherum
and Ptilagrostis were shown to be sister groups to Austrostipa (B.K.Simon). 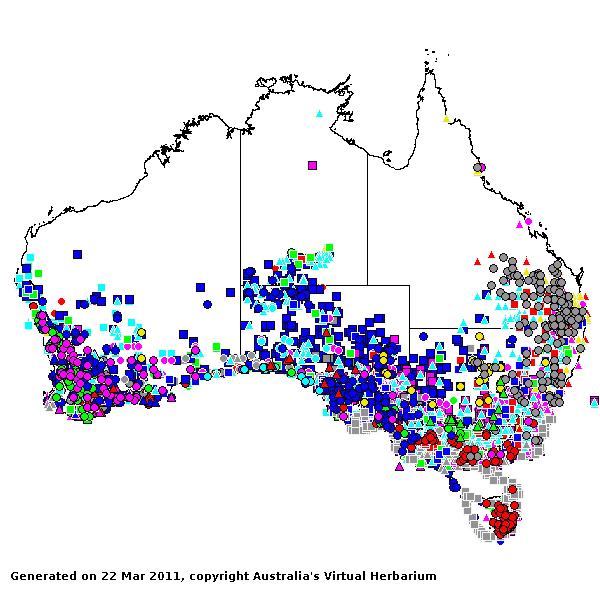