Spikelets. Spikelets all partially embedded in rachis or not all embedded, laterally compressed to dorsally compressed, 1 flowered, with 1 fertile floret, in triplets (the triplets shed together), usually in pedicelled/sessile combinations (the central spikelet of each triplet sessile, the laterals pedicellate, with the broad side of the spikelets facing the axis); usually with naked rachilla extension (at least in the central spikelets of the triplets). Fertile spikelets falling with glumes (in the deciduous triplets) or not disarticulating (in cultivated forms).

Notes. A uniform genus of closely related taxa (Clayton and Renvoize, 1986). Critesion  was formerly separated on the basis of a having a different genome, but cladistic work by Kellogg (1989) demonstrated it was not worth maintaining as a genus (B.K.Simon). 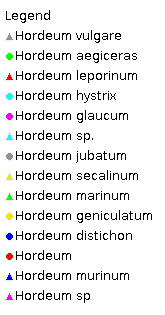