Derivation:. From Greek xeros (dry) and chloe (grass), referring to the dry nature of the grass.

Inflorescence. Inflorescence paniculate (of globose, spathaceous units, fascicled and interspersed with prophylls, the fascicled units solitary and terminating the culm, or arranged in a leafy panicle), a spatheathe panicle, spatheate, terminal branches contracted into tight heads, a compound pseudo-inflorescence. Spikelet-bearing axes much reduced (to very short spikes, with tough rachides), clustered (with groups of 3–5 in a spathe), falling entire or disarticulating at joints (the ultimate units breaking up, or falling entire).

Spikelets. Spikelets all partially embedded in rachis or not all embedded, laterally compressed to dorsally compressed, 2 flowered, with 1 fertile floret, solitary, sessile. Fertile spikelets with lower incomplete floret(s), oblong or elliptic or lanceolate or ovate or obovate, abaxial (with lower glume on side away from rachis), falling with glumes (with the spikelet bearing axes falling, and a second zone of disarticulation beneath the glumes).

Notes. Diagnostic characteristics of the genus are the derived features of the inflorescence, which is solitary and clustered in a spatheate raceme. This is intermediate between the typical Panicum form and the Zygochloa form. Xerochloa  is morphologically most similar to Zygochloa  and Spinifex (Webster 1987). However it is not dioecious, whereas Zygochloa and Spinifex both are (B.K.Simon). 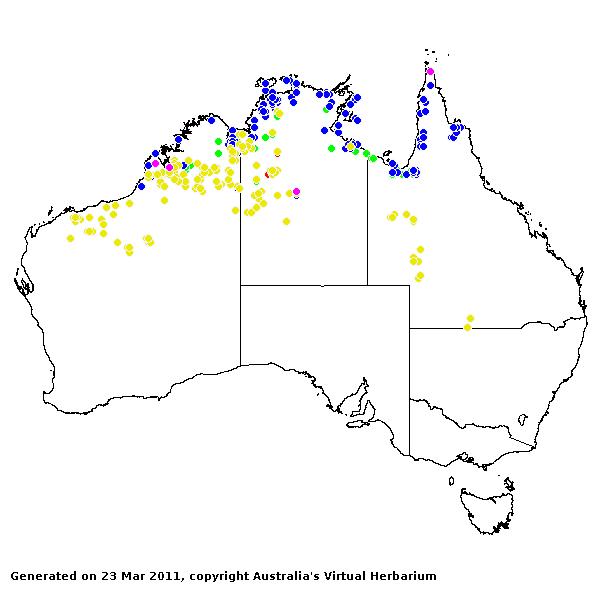