Derivation:. From the Arabic thaemed (little water), possibly referring to water storage cells on the upper surface of the leaves or to the habitat of the type specimen in Yemen, fide L.K.A.Chippindall and A.O.Crook, Grasses of Southern Africa (1976).

Inflorescence. Inflorescence paniculate (leafy, comprising short racemes in spatheate, hard-to-interpret clusters), a spatheathe panicle, open, spatheate, terminal branches contracted into tight heads, a compound pseudo-inflorescence (composed of short racemes in spatheate clusters: each cluster terminated by 1–3 pairs of spikelets, one of each pair sessile and bisexual, the other pedicelled and male or sterile (or a triplet of 1 terminal sessile spikelet with 2 pedicellate ones), the whole surrounded by a whorl of 4 male or sterile, sessile spikelets constituting an involucre). Spikelet-bearing axes much reduced, with heteromorphic spikelets, clustered (the racemes solitary in their spatheoles, these units in groups of three or more in short capituliform glomerules), disarticulating at joints (each raceme disarticulating at the level of the female-fertile spikelets).

Notes. The genus is clearly related to Heteropogon though the nature of the inflorescence is not always easy to perceive as the racemes are much modified and often compacted into dense clusters. The sessile spikelet is normally shed in the usual way, but in two species the whole raceme is deciduous with the sessile spikelets still attached. Themeda is distinguished from Iseilema by the homogamous pairs being separated by a short internode (Clayton and Renvoize, 1986). 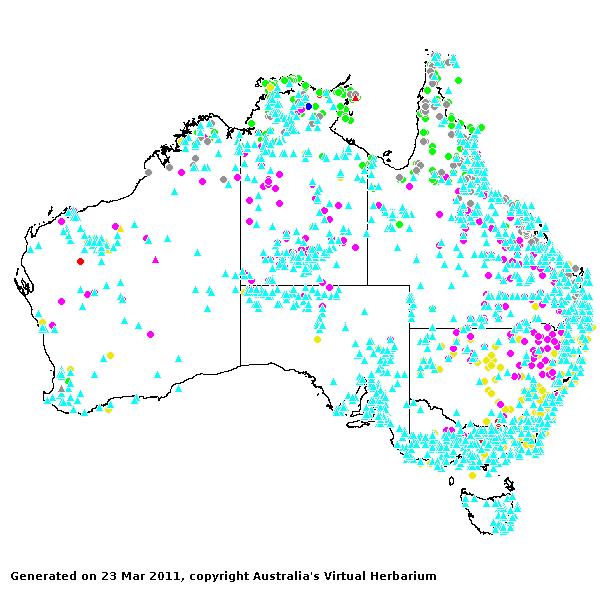 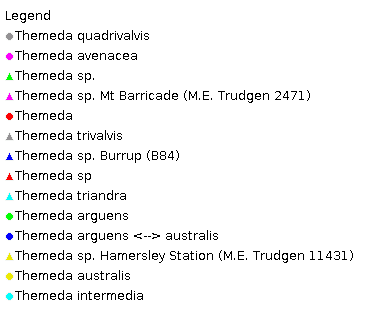