Derivation:. From Greek stenos (narrow) and taphros (trench), alluding to the cavities in the rachis.

Inflorescence. Inflorescence of spicate main branches or a false spike, with spikelets on contracted axes (the spikelets 1 to several, in very short spike-like racemes embedded in hollows of the corky or foliaceous common axis, or in longer racemes closely appressed to it), a spike-like panicle, spatheate (the small racemes subtended/enclosed by spathes which are laterally adnate to the rachis) or espatheate, a compound pseudo-inflorescence or not a compound pseudo-inflorescence. Spikelet-bearing axes much reduced (sometimes reduced to one spikelet with no rachis extension, or coalesced with the main axis), falling entire (the free racemes falling with the joint of the main axis) or disarticulating at joints (when the spikelet bearing unit consists of a coalesced main axis and branches).

Spikelets. Spikelets all partially embedded in rachis, dorsally compressed, 2 flowered, with 1 fertile floret, solitary. Fertile spikelets with lower incomplete floret(s), elliptic or lanceolate or ovate, abaxial (with lower glume on side away from rachis), falling with glumes.

Notes. Derived from Paspalidium by a progressive reduction of the racemes and expansion of the central axis. Concomitant with retreat of the upper floret into the axis is the transfer of protective induration from the upper lemma to the lower. The swollen inflorescence axis is presumably an adaptation to dispersal by sea, but it only remains buoyant for about a week (Clayton and Renvoize, 1986). 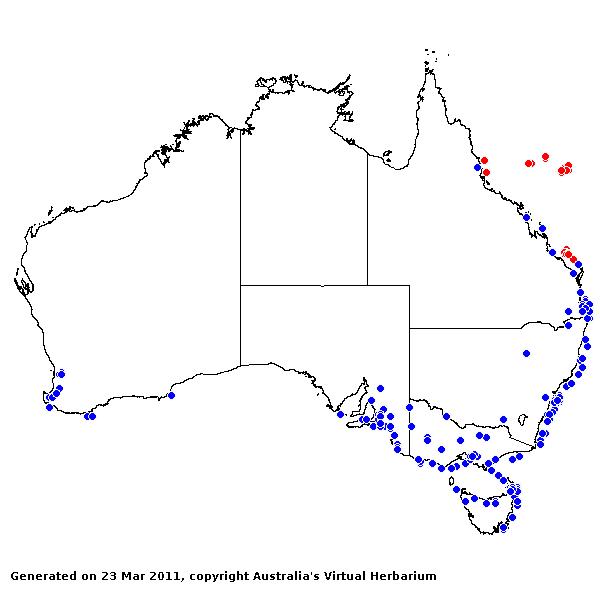