Notes.
As well as its value as a sand stabiliser, D. aegyptium is considered
useful as pasture in some areas, and persists under grazing, but is reported
(from overseas) to be rich in cyanogenetic glycosides and therefore a danger to
stock at certain times.

Previously described as an annual, D.
aegyptium frequently assumes a perennial, stoloniferous habit in Australia, and
has been confused with the perennial D. australe. However, D.
aegyptium is distinguished by the much shorter anthers and shorter rachis
prolongation, with usually a greater number of spikes and abaxial side of leaf
blades usually hairy from the base. It differs from the Australian endemic D.
radulans in having a globoid rather than plano-convex or ellipsoid
caryopsis, spikes usually longer and free from each other except at the base,
and a taller habit.

Introduced;
occurs mostly within 200 km of the eastern coast of Qld, from Brisbane to
northern Cape York, in the northern part of the N.T. and within 100 km of the
coast in the Kimberley region of W.A., but also reported from settled inland
areas of the N.T. and Qld. Planted as a sand stabilizer in N.T. and coastal
N.S.W. and persistent in some of these areas; A pan-tropical weed, distributed
throughout the Old World Tropics, probably originating in Africa, and
introduced into America. Most common in disturbed areas but also present in
open Eucalyptus forest on a variety of soils, and on coastal dunes;
flowers Jan.-Apr. 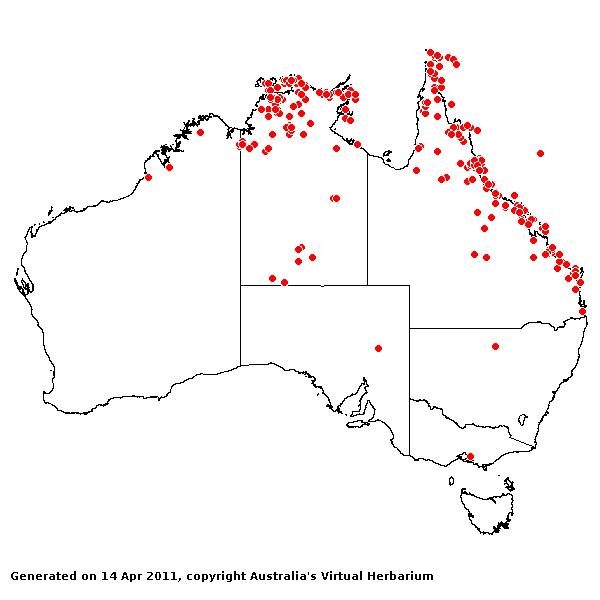